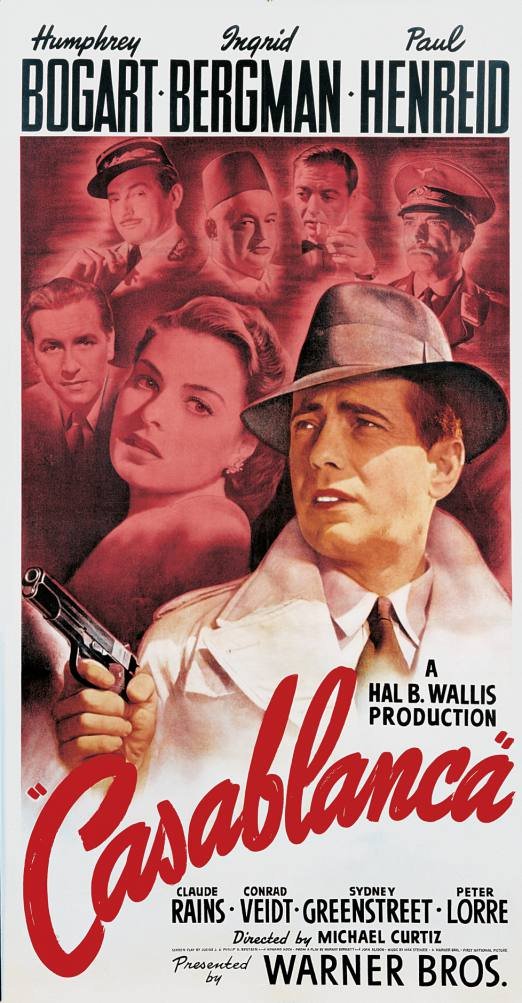 I have long avoided watching “Casablanca” and I wish now I hadn’t. I was under the impression it was a romance. I thought star-crossed lovers would make googly eyes at one another and kiss their way through a forgettable plot. I imagined “Twilight” both before and after “Twilight” existed. Now that I have forced myself to watch it, I really regret my preconceived notions of the film.

1942’s “Casablanca” stars Humphrey Bogart, Ingrid Bergman, and (most importantly for reasons we will get to later) Claude Rains. It takes place during World War II in Casablanca, Morocco, while the city is under free France rule.

The setting largely revolves around Rick’s Café Américain, owned and operated by Rick (Bogart), a mysterious American expatriate with a penchant for fighting for the losing side in any war he participates in. At the outset of the story, he makes claims to Captain Louis Renault (Rains) that he is neutral, but the French prefect of the police in Casablanca thinks he is more sentimental than he lets on.

For me, the most fascinating and enjoyable aspect of “Casablanca” is its setting. The city functions as a neutral territory for all sorts of Europeans trying to flee the encroach of Nazi Germany. There, they wait to be flown out, but because of visa concerns and the black market cost to resolve said concerns, most end up waiting there indefinitely.

Rick’s Café Américain in particular is the place everyone goes to for a drink, to gamble, or listen to music. In particular, they listen to Sam, an African American and friend of Rick’s who left Paris with him. Sam, played by Dooley Wilson, is the first African American actor with any real role we have encountered on this list who was not playing a slave. I doubt he was the first ever actor to have that distinction in American cinema, but it was refreshing to see someone of color with some degree of agency all their own even if his role was limited.

When I first realized what was happening in the film’s setting, I instantly thought it would make a great D&D setting for an adventure. There aren’t too many films I can think of off the top of my head that feel this unique in just where they are set alone. The fact that the film was contemporary to World War II and that many of the actors were Europeans who had escaped the tyranny of Nazi Germany made it all the more impactful. For its historical importance alone, I think “Casablanca” is a significant and important film that more people like us should’ve seen before we turned 30.

Beyond the setting, the characters themselves are all interesting. Bogart and Bergman both give great performances. I am already tiring of “Bogart playing Bogart”, but this was the first time seeing Bergman. Diane remarked at how attractive she was, especially when compared to other leading ladies we have seen thus far, since she had a fuller face and wasn’t all angles. With a little less romance in the script, I think the character could’ve been phenomenal, but Bergman does well with what she is given.

My absolute favorite character is Captain Louis Renault played by English actor Claude Rains. We previously saw Rains as Prince John in “The Adventures of Robin Hood”. Here, he plays a Frenchman who is as cynical as he is unscrupulous. Everytime he was on screen, he would slime out a laugh from me. My favorite scene was when the Germans forced him to shut down the nightclub and he had to come up with a reason on-the-fly to do so. Without skipping a beat, he shouts that he has discovered illegal gambling just before being handed his gambling winnings for the night. Through and through Renault is a scoundrel, but Rains plays him so well that you can only love his cheek and nerve despite abusing his power at every turn.

My second favorite and Diane’s first was Carl, a waiter played by S. Z. Sakall. Though he gets relatively few scenes and even fewer lines, his facial expressions alone were enough to make him memorable.

As for the romance angle itself, it was hard to really care about whether the characters were truly in love or not. For both of us, that entire subplot took a backseat to world-at-war setting and gravitas of everything else. Scenes with dueling national anthems with people expressing their love of country had more impact than the will he/won’t he nature of Rick’s actions. The love triangle also barely factored in since the other male in the triangle, Victor Lazslo (Paul Henreid) barely had time to pay attention to it while he was doing far more important things.

It didn’t help that we both knew how it ended. Bogart’s final speech to Bergman before she boards the plane has been quoted endlessly in pop culture. Without seeing the film, I knew it. Again I find remarkable what lasts from these older movies regardless of their historical importance. That speech, while worthy of quotation, failed to compare to everything else going on in the movie and in the world at the time of its filming.

I will not give “Casablanca” the distinction of being my favorite film on this list, but I would watch it again. It manages to be horrifying, humorous, and historical all simultaneously. I wish more time was spent on stories like this rather than big budget war movies about World War II. It’s amazing how epic in scope such a small setting could be when the whole world is at war.