Apologies for my delay in a new post! After posting every day for Blaugust and my recent change in positions at work, I needed a vacation from everything. That said, let’s talk about my vacation to New Orleans.

Neither Diane nor I had ever been the New Orleans, despite not living very far away. I don’t think we knew what to expect either. We planned very little in advance, preferring instead to go in whichever direction our adventure took us. We had a few things we wanted to do though: we both wanted to eat something good and Diane wanted to take us on a ghost tour.

On our way to Louisiana, we stayed overnight with Diane’s cousin in Alabama. Nothing noteworthy happened, though it was a pleasure seeing family. I like her cousin a lot. She has a gigantic POP! Figure and movie collection, which was fun to peruse. She also made us a delicious rice dish which I gratefully ate two bowls of before taking a few more bites out of Diane’s.

Driving into Louisiana the next day, we knew we were heading in the right direction when we spotted an alligator dead on the highway. Talk about roadkill! In the South, we worry about hitting deer since they are numerous, roads are especially dark, and most of the state is un(der)developed wilderness. I cannot imagine what it would be like to hit something as low and heavy as an alligator.

We arrived too early to check into our hotel, so I drove down toward the French Quarter instead. That was a mistake. I wanted to visit the hat store (spoiler, I didn’t buy a hat) right away, but the streets there are narrow, there is no parking available, and people were constantly walking back and forth across those narrow streets. I hate driving in that kind of environment, especially when I do not know where I am going, so we quickly turned around and found the first paid parking lot ($15!) and just walked.

The first big surprise for me was the number of people walking around with an alcoholic beverage in hand. I suppose I am far more conservative than I realize because the sight was quite shocking. I am used to drinking being limited to socially-acceptable drinking spaces; not drinking as you wander from bar to bar or kitsch shop to kitsch shop. The number of places advertising “cocktails to go” in absurd sizes (fishbowls, as an example) made me immediately think that New Orleans is Disney World for alcoholics.

Beyond the free flow of inebriants, the French Quarter was quite beautiful. I loved the Old World architecture, especially as it was blended in with new stores and store fronts. I have never been to Europe (or France specifically), but I still got that vibe from the images/movies I have seen.

After parking, we wandered around on foot until we found the hat store. All weekend long I had trouble using Google Maps for walking. The internal compass of my phone always seemed askew and every time I thought we were going the right way, we weren’t. When we finally found the place, I was first elated with the selection and then I became disenchanted with how everything looked on my head. For years I wanted a beard but it never “looked right” and now that I do and it does, I remain hopeful that my same want for a proper hat and my similar inability to get one that works will one day be a thing of the past. For now, I range anywhere from douche, to old man, to cheesy tourist depending on the hat. Never do I look cool.

After our sneak peak, we went to our hotel to check in and get ready for dinner. The hotel was nice, which was a plus, because we mostly got it for a) free parking and b) its proximity to where we wanted to go. I was a little concerned when we first got there because it is immediately next to/behind a small hospital, but it was quiet.

Our first meal was at Gabrielle’s, a restaurant resurrected after its destruction by Hurricane Katrina. It was a small but intimate place not too far from the hotel. The meal came with free bread. Each time they brought us a loaf, we’d devour it and each time the waitress would ask if we wanted more. The couple next to us barely touched theirs but it was too delicious not to keep getting more. I kept giving them a side-eye for being bread-ignoring weirdos.

Overall, the meal was good, but I doubt I would go back or recommend it to anyone else. Of all the places we would eat, it was easily the most “frou-frou”. As such, it came with small portions and big price tags. We were both disappointed in the bread pudding. It had enough alcohol left in it to still burn as it went down your throat. It tasted more bitter from the booze than sweet from anything else. I am sure some people enjoy their desserts the same as they like their shots of bourbon, but I have always avoided those kinds of desserts. It reminded me of my Aunt’s rum balls she brought for Christmas: pleasant only if you like the challenge of eating enough of them to get a buzz. 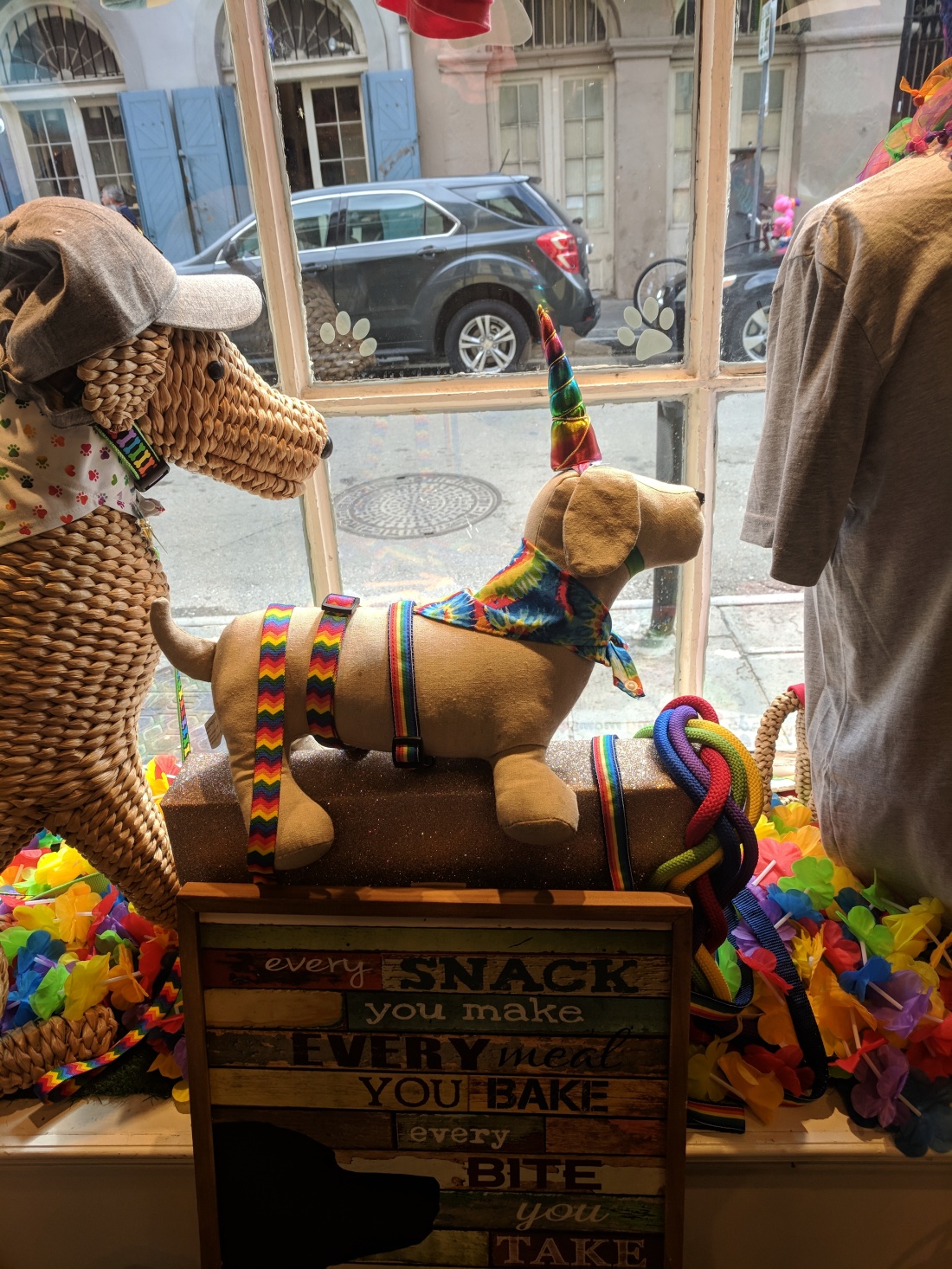 From there, we walked back to the more fun parts of town. Most of the weekend, we opted to walk at least to where we were going and Uber back to the hotel when we were done. That way, we avoided going down unknown streets late at night. My dad, who admits to being a New Orleans fan who lived nearby for many years, made it clear to me that we should be very, very careful late at night. I felt less worried when we arrived, couldn’t remember where we parked, remembered it was near a police station, googled for the nearest station, and found at least six. There were police everywhere we went including some on horses, some on bikes, and some in SUVs.

Despite doing a ton of walking (we hit 25,000 steps one of the days), it was a lowkey weekend. We enjoyed wandering around all day and night. On Sunday, we got trapped in by a gay pride parade, which was great because we eventually found a place to stand and watch. With that going on, it was easily one of the gayer weekends of my life. I always thought of New Orleans as a place to see lots of boobs. We walked by Coyote Ugly and there was a white girl poorly dancing on the bar top to an empty room. Instead, we saw a lot of butts and, if the butt wasn’t exposed, then it was a bear in short-shorts.

And it was so much fun! A gay man hit on me, err, hit at me. He told Diane, “Honey, you better keep him close”. I was exhilarated. No one ever hits on me and I have never had a man hit on me. Sure, it was a little scary to be checked out by a hairy, shirtless man drinking on a stoop late at night in a strange city. Still flattering. I think the world would be a better place if unsolicited flirtation was more equitable for both sexes (and any other persuasions). In a single moment, my straight white male self gained a much better understanding of the paradox of how a compliment can be both welcome and unwelcome. 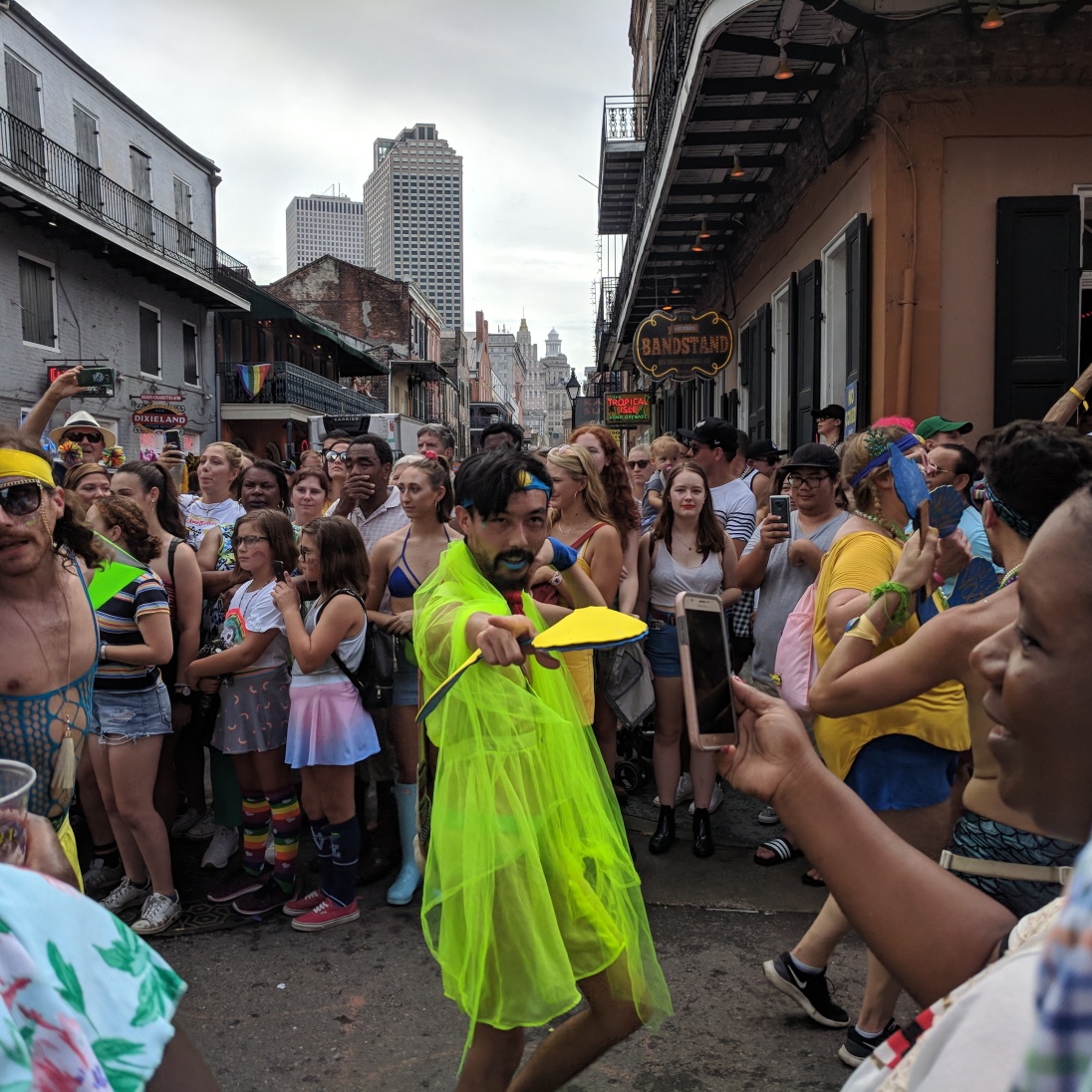 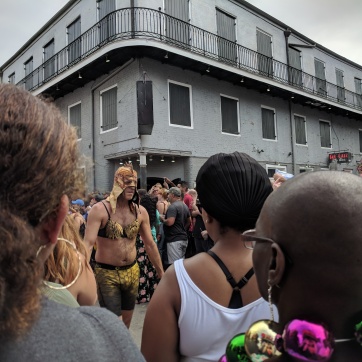 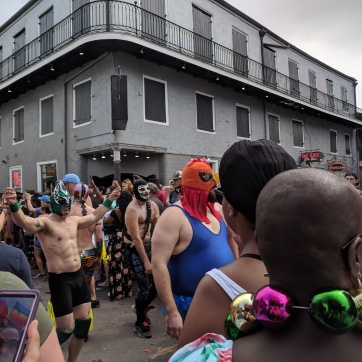 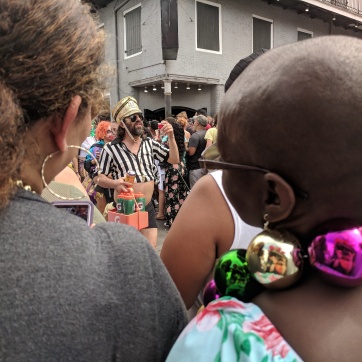 The parade itself was, to be cliched, fabulous. There were belly dancers and gay luchadores and Elvises and elves and other costumes I cannot explain. For the S&M portion, I felt like I was watching Beast Master only on a broken television where blacks and grays were turned to all the colors of the rainbow. I loved watching Beast Master as a kid and I imagine some of those fellas did too, albeit for slightly different reasons.

There was an anti-homosexuality group marching as well, but they were small. They also got booed like heels at a wrestling event. There was another hate group with a bullhorn on a different day, but we let them be and kept going our own way.

Later the same night, we did our one and only walking ghost tour. Diane was most excited for it, but I was less so. The big draw for me were the BOGO hurricanes for going. I have to say though, after having done it once, I would go again. Less a “haunted hay ride” with jump scares and more a history/folk lore lesson, it was a ton of fun. Our tour guide was very nice and informative, but the biggest highlights for me were all the drunken crazies that kept interrupting us.

I learned a lot about voodoo and vampirism and how they relate to New Orleans. I snapped a few photos to see if I could get any “orbs” (I am not too up to speed on the ghost hunting thing) but no luck. At the end, the tour guide advised us to remove our wristbands since they were clear indicators that we should be mugged so we did.

Beyond the walking and discovering my bicuriosity, we also ate great food. Diane is less familiar with Cajun and Creole cuisine – I more or less grew up eating this kind of stuff – so we stuck to the staples. We got a debris po’boy from Mothers, a popular spot that had a long line. It was delicious. Think roast beef but more intense and served on fresh bread. We also tried New Orleans coffee (a crushed ice, milk, coffee, and chicory blend that was pretty tasty). Finally, we sampled several gumbos at several places, as well as an etouffee and a jambalaya. The weather was drizzling off-and-on, so all the warm rice dishes were welcome despite it being a hotter/more humid time of year.

As much as I will forever treasure the experiences we had, I don’t think New Orleans is the place for us. I’d love to stop by again, but I doubt we ever directly go there. I would do more ghost tours and other walking tours, but the city’s focus on drinking and nightlife is less what I want in a vacation. I never was a big partier, not even in college, and it was hard finding some of the quieter, calmer spots to relax. I loved a lot about the city and am grateful it exists, but visiting once is all most people will ever want to do when it comes to New Orleans.