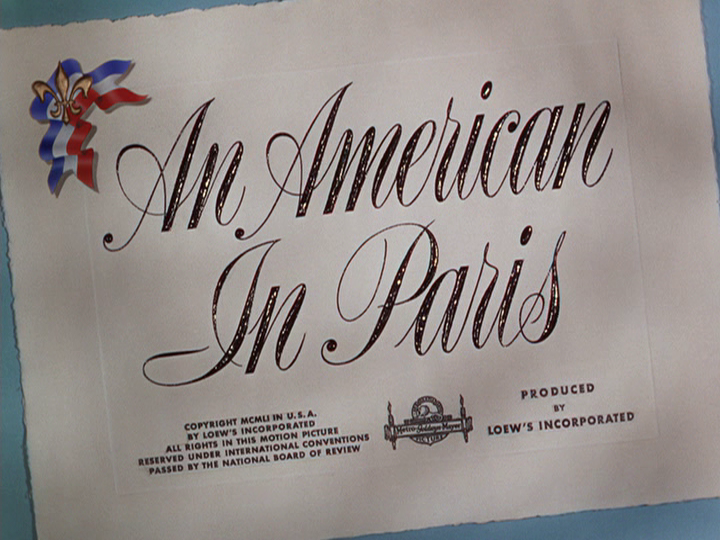 After “Anchors Aweigh”, we were marveled by Gene Kelly’s talent, but not necessarily excited to see more of his films. This week, we are reviewing “An American in Paris” from 1951, an altogether superior film and another vehicle to showcase Gene Kelly singing and dancing.

I am unsure what makes “An American in Paris” feel like a lesser musical when compared to musical films I love (“Little Shop of Horrors”, “The Producers”, most of Disney’s animated films, etc.). My biggest issue is that the plot and characters feel secondary to their in-character performances. Rather than review the movie from the standpoint of it being a bad movie and an okay musical, I am going to attempt to leave my bias behind and focus on “An American in Paris” as an elaborate variety show instead.

The film follows Jerry Mulligan (played by Gene Kelly), an American soldier living in Paris after World War II. When the war ended, he remained in Paris to follow his passion of painting. Joining him are Adam Cook (Oscar Levant), a struggling pianist, and Lise Bouvier (Leslie Caron in her American debut) as the romantic interest.

The plot revolves around a love triangle between Jerry, Lise, and the French singer Henri (played by George Guétary). Henri is a friend of Adam, who is also a friend of Jerry’s. Henri tells Adam about a woman he is engaged to marry (Lise). Soon after, Jerry happens to meet Lise and falls in love with her instantly. Until the film’s climax, neither man is aware of the other. I am sure this film has some fans for its story, but it really just serves to move the players from one performance to the next.

The performances are where “An American in Paris” shines best. Unlike “Anchors Aweigh”, which felt bogged down by having to fit in the shell of what a movie is expected to be, “An American in Paris” breezily moves from a dance, to a song, to a concert at a fantastic pace. Better yet, the film is fun and colorful. Early in the film, when Henri tells Adam about Lise, she dances on the screen to his descriptions of her personality. It is fantastic and a great introduction both to the character and the actress, who was a trained ballerina.

Gene Kelly also shines. While the other acts in the film help give you a break from him as the film’s star, he never has to share the limelight the same way he had to do with Frank Sinatra in “Anchors Aweigh”. He is fantastic. Sure, his “romantic pursuit” of Lise was slimy by modern standards, but I’d let any man that light on his feet try to court me too. He was charming and likable every second he was on the screen.

The other performances are great too. George Guétary gets several songs, but his performance of the song “I’ll Build A Stairway to Paradise” had an amazing set and stage production within the film. Similarly, Oscar Levant’s performance of Gershwin’s Concerto in F for Piano and Orchestra during one of his daydreams was equally stunning.

Speaking of Gershwin, it would be difficult to review “An American in Paris” without commenting on the film’s music. While modern musicals rely on lyrics to be memorable, Gershwin’s score alone is worth watching the film. I primarily know Gershwin from his composition “Rhapsody in Blue”, but it was awesome hearing more of his original music. It is fantastic.

The film’s closing was our absolute favorite part. While Lise runs off with Henri after the love triangle and tryst have all been laid bare, Jerry dreams of her returning to him. His dream takes the form of a 17 minute ballet within the movie. Amazing in scope, even by today’s standards, the sequence was a marvel to behold. In my research, I read that it cost nearly half a million dollars to shoot and I believe it. It easily rivals the ending performance we saw in “42nd Street” and I think it is worth the watch alone.

“An American in Paris” was not a new favorite film on this list or new favorite musical. There is too much holding it back from either of those titles. At the same time, it was an incredibly fun film to watch and it never overstayed its welcome. We both preferred it to “Anchors Aweigh” and I am curious to see how it stands up to our next film on the list: “Singin’ in the Rain”.