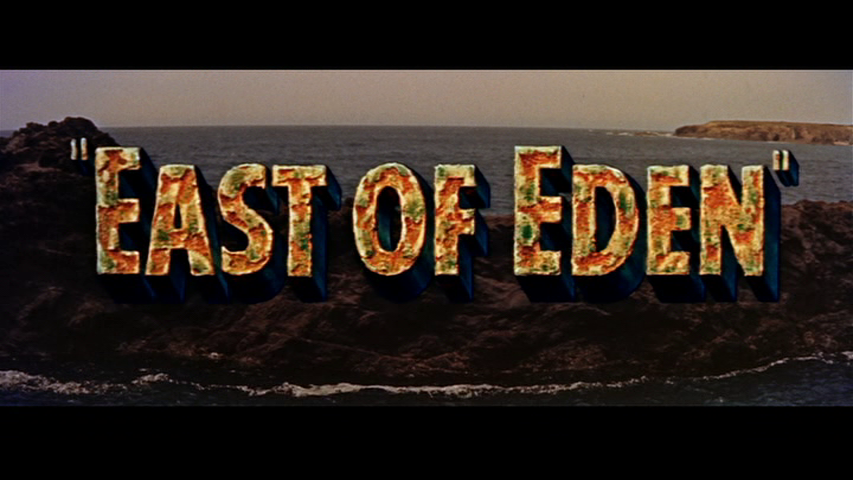 1955’s film “East of Eden”, starring James Dean, is the first movie on our list to star the actor and the first time we have seen him act. In his tragically short life, all three films featuring James Dean are featured in this box set. Along with “East of Eden”, there is also “Rebel Without A Cause” and “Giant”. Given his status as a cultural icon, our reviews for these films will spend a lot of time on James Dean, but, at least in the case of this film, “East of Eden” is worth seeing regardless (and perhaps because) of James Dean.

Adapted from renowned American author John Steinbeck’s 1952 novel, the film takes place in California in the late 1910s shortly before the United States got involved in World War I. Primarily taken from the book’s second half, the 1955 film version of “East of Eden” focuses on the relationship between two brothers, Cal (James Dean) and Aron (Richard Davalos), with their father Adam (Raymond Massey), a successful farmer with a reputation for his goodness and Christian values. While Aron is the perfect child and his father’s favorite, Cal is a troubled young man desperate to understand who he is and why his father will not accept him for it.

The cinematography in “East of Eden” does a fantastic job of bringing rural California to the big screen. Shot in CinemaScope, the film holds up well today. Like “The Treasure of the Sierra Madre”, it is great to see another film shot on location, especially in a part of California that isn’t Hollywood or one of the state’s major cities.

On first impression, Diane and I were both mixed on the acting of James Dean. He did a convincing job of playing a troubled youth, but my prior knowledge of Steinbeck had me worried this would be a Lennie situation from Of Mice and Men (in other words, a mentally unstable character). Without another role to judge him against, neither of us felt comfortable negatively reviewing Dean’s work in “East of Eden”. In truth, he is compelling here and brings plenty of emotion to the role. In the film’s climax when he presents a gift he believes will win his father’s love, Dean’s Cal finds only heartbreak from the disapproval he receives in response. That heartbreak is the audience’s heartbreak as well when Cal’s eagerness throughout the entire film to please his father turns into absolute despair.

We were also impressed by Raymond Massey’s Adam and Richard Davalos’ Aron. From one of the film’s earliest scenes, Adam confesses that while he understood his son Aron, he never understood his other son Cal. The movie doesn’t explore Adam’s morality too deeply nor does it try to expose him as a fraud. His confusion over his son Cal is to be expected since Cal often does what he wants despite any repercussions such as when he steals a coal shoot to help his father’s business. Aron, a mirror image of Adam, never has to try to earn his father’s approval since everything he does is in accordance with how Adam would wish it be done.

Like the book, “East of Eden” the film is a retelling of the Biblical story of Cain and Abel. In the book, there is more explanation and background (since it covers several generations), but the film seems to do a good job distilling the highlights. There is no attempt to be clever or to hide this retelling either. Cain and Abel are mentioned specifically and Adam’s religion is a major part of his character.

Diane and I took a long walk after watching the movie. At first, I had little to say, but as we talked and shared our opinions, we both realized that there is a lot of subtext to “East of Eden”. For instance, during the film’s climax, Cal reveals to Aron that their mother is still alive despite their father telling them otherwise all their lives and that she is a woman of ill repute. The shock of Aron learning about his mother and other related events causes Adam to have a stroke. Despite stating earlier that nothing would cause him to join the war, Aron enlists and runs off to fight in World War I the next morning leaving Cal to take care of a father who he claims he no longer needs. Paralyzed and with limited speaking, Adam asks Cal to send away his annoying nurse and Cal takes this as a sign that he should remain and look after his father.

Without Adam confirming it, Cal states that his father wishes for him to remain by his side. Like Abel who was murdered by Cain, in the novel, Aron goes off to war because of Cal’s actions and dies. Unlike the myth where Cain is forced into exile, here Cal remains behind in an exile of his own choosing (the constant torture of trying to appease an overly moral man) and Adam also joins him in exile perhaps to pay for failing Cal as a father.

Or, at least that is my take. More surface-level, Cal tells his father that it is his choice what kind of man he is and that he chooses to remain by Adam’s side to take care of him. Adam sheds a tear because his son did listen to his lessons and may finally turn his life around. Cal understands that he has the power to be a good person now and he assumes the position of Abel (the favored child) while his brother petulantly marches off to a war he never believed in as his first and last act of defiance against his lying father.

Either way, “East of Eden” is a solid film and one worth having a few chats about. The film looks great, the acting is compelling, and the story will hold your interest. Diane and I both enjoyed this film and we look forward to confirming whether or not James Dean was a great actor.