Calling 1956’s “Around the World in 80 Days” anything less than a monumental achievement would be unfair. Its breadth, its beauty, and its journey have no analogue in any of the films we have watched in this series thus far. Yet, as we traversed the globe on a comedic adventure, I felt like more than eighty days had passed between the movie’s beginning and it’s somehow-abrupt end.

Adapted from the novel of the same name by Jules Verne, “Around the World in 80 Days” stars David Niven as Phileas Fogg and Cantinflas as Passepartout. Set in 1872, Phileas Fogg, a highly punctual English gentleman, takes a bet from the other gentleman in the Reform Club (an all-male private club of which Mr. Fogg is a member). The wager falls on whether or not Phileas can circumnavigate the globe in 80 days or less to which he alone believes he is capable. Joining Phileas is Passepartout, his newly hired valet and the film’s primary source of comedy.

I was unsure what to expect from this movie. Though familiar with the work of Jules Verne, I have never had the pleasure of reading any of his writing, and have only experienced his ideas filtered through the minds of others throughout a myriad of pop culture adaptations and homages. In regards to the film’s authenticity to its source, I cannot attest, but I did not expect an outright comedy. To be frank, “Around the World in 80 Days” was not for me. I rarely laughed and far too many scenes seemed to go on until their jokes turned to tedium. 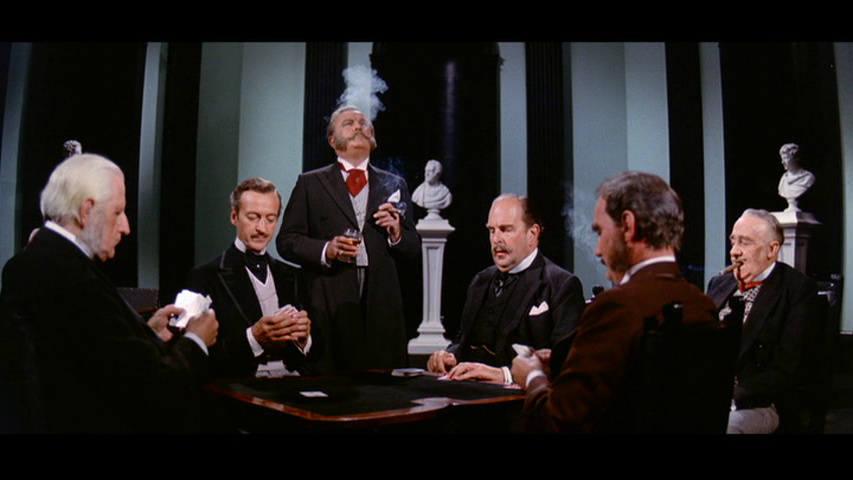 That is not to say there was nothing I enjoyed in the movie. “Around the World in 80 Days” is still a beautiful film. Shot on location around the world, if this film were shot today, it would likely be limited to one or two major locations or heavily feature CGI. More than the plot or humor, traveling various countrysides on train or seeing things from the perspective of a hot-air balloon was plenty of adventure for me.

The acting is also fantastic. Prior to watch, I had no real experience with either David Niven or Cantinflas. Both gave spirited performances. I enjoyed the overly English gentleman of Phileas Fogg. In many ways, he is an atypical protagonist in this kind of film, and the fact that someone like him (distant, a bit cold, too posh) ends up with the girl rather than his lady-chasing valet struck me as odd. In some ways, I found Phileas to be a kind of proto-Doctor Who character, sorting out the world’s problems and making the impossible happen as only a white Englishman can!

In regards to his valet Passepartout, I have no idea what the studio paid Cantinflas, but I can guarantee it was not enough. This man did everything: comedy, stunts, dances, etc. The script did him little justice, yet I found impossible to take my eyes off the man. Sure, some of that was me staring at his horrible facial hair, but the vast majority was my awe at his immense talent.

Beyond Niven and Cantinflas, “Around the World in 80 Days” was loaded with familiar faces. A young Shirley MacLaine plays Indian Princess Aouda (yeah, we rolled our eyes too). Charles Boyier, Peter Lorre, and Frank Sinatra all have brief cameos. Those are only the ones I noticed, though it appears there were many more (such as Cesar Romero, television’s Joker, as a henchman and Buster Keaton as a train conductor).

In trying to recall much more of the film for this review, most has already been forgotten. Other than the positives above, I just remember being bored when the movie wasn’t showing off a few sweeping shots of an authentic location. Cantinflas’s bullfighting scene stands out still as in it nothing happened but the same exact motions on repeat. I applaud the actor for getting in the arena with a bull, but either it is a dull sport or the film’s depiction of it is less than thrilling.